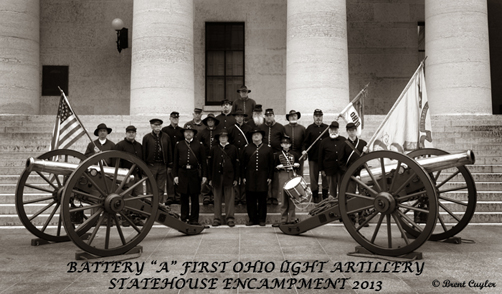 1st Ohio Light Artillery, Battery A is a nonprofit volunteer educational organization of American Civil War re-enactors. The Battery is a 501c3 not for profit group and may accept donations and sponsorships. Battery A partners with the Capitol Square Review and Advisory Board (CSRAB, a state agency). The unit's purpose is to promote the Ohio Statehouse and its identity as a site of civic involvement, education, and visitation; and also to promote awareness of state government and the state legislature.

Battery A accomplishes this by educating the public about Ohio's role in the Civil War and by fostering interest in and study of Ohio and American history through living history activities. These activities include instructional talks, demonstrations, ceremonies, and reenactments of battle, camp, and civilian life in mid-19th century America. These activities take place at the Ohio Statehouse and elsewhere, and involve the safe use and demonstration of some or all of the four original civil war cannons that reside at the Ohio Statehouse.

Battery A and its cannons always portray a U.S. Army unit, and an Ohio unit whenever possible. Also whenever possible, the Battery should portray the historical Battery A, 1st Ohio Light Artillery. At events away from the Statehouse, individuals may "galvanize" with Confederate units, but the guns are always Federal and are always operated by U.S. troops.

The following is the text of Battery A's state charter:

Whereas it may be of great use to the Government of the People of the United States now engaged in the Operations for preserving the Union in America, to have a Battery of Artillery employed in the education of said Government and People, as well as to take part in the mobile operations of the campaign season to enlighten the populace of our state and nation. We do therefore Hereby Constitute and commission...

You are therefore ordered to use your best endeavors to keep the said battery in good Order and Discipline. The Battery is to observe and follow such Orders and Directions from time to time as the Shall Receive from the Commander in Chief, their Major, or any other superior officer, According to the Rules and Discipline of War.

Battery A includes a group of civilian re-enactors who support the educational mission of the organization, and participate in Battery functions.

This page is presented in fond memory of our first Captain Greg Brown.

Highlights of Re-enacting History with the Statehouse Guns:

*Statehouse cannon did not attend this event.

Battery A, 1st Ohio Statehouse Light Artillery is an educational organization that participates in Civil War reenactments and commemorations at the Ohio Statehouse and at other sites. Battery A also helps teach history by bringing the concept of "living history" to all Ohioans.

The organization, modeled after a Civil War-era Union Army artillery unit, is commissioned by the State of Ohio and partners with Capitol Square Review and Advisory Board. The Battery focuses on the Civil War because the Statehouse was completed in 1861, and the Battery's living history efforts complement the recently restored capitol.

The soldiers of Battery A are not only trained to demonstrate the Statehouse's restored, Civil War-era guns, but also to talk about the everyday life of a soldier, including work, clothing, diet, medical care, battle and recreation.