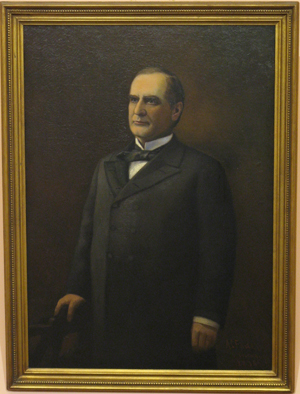 Born in Niles, Ohio, William McKinley had a stunning career as a teacher, attorney, Stark County prosecutor and a Civil War Major—all before being elected to serve in the U.S. House of Representatives and then serving two terms as Ohio Governor. He was the last Civil War veteran to serve as President. He brought the nation out of isolationism into an emerging world power, retained the gold standard, championed railroad safety and tariffs to support U.S. jobs.

The 25th U.S. President was legendary for his kindness, his front porch campaign, his devotion to his invalid wife and for the red carnation he always wore in his lapel. The Ohio legislature named the red carnation as the state flower following McKinley's death on September 14 after an assassination attempt on September 6, 1901.

Items on display in the McKinley Room include: