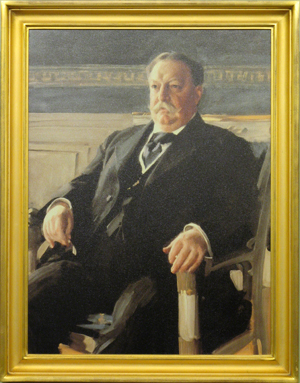 William Howard Taft, born in 1857, was a son of a distinguished judge, a graduate of Yale, a news reporter, a lawyer, a professor and a Dean of the University of Cincinnati. He is the only President to also serve as Chief Justice of the United States Supreme Court.

His route to the White House was via administrative posts. President McKinley sent him to the Philippines in 1900 as chief civil administrator. Sympathetic toward the Filipinos, he improved the economy, built roads and schools, and gave the people at least some participation in government. President Roosevelt made him Secretary of War, and by 1907 had decided that Taft should be his successor. The Republican Convention nominated him the next year.

Taft, free of the Presidency, served as Professor of Law at Yale until President Harding made him Chief Justice of the United States, a position he held until just before his death in 1930. To Taft, the appointment was his greatest honor; he wrote: "I don't remember that I ever was President."

Items on display in the Taft Room include: