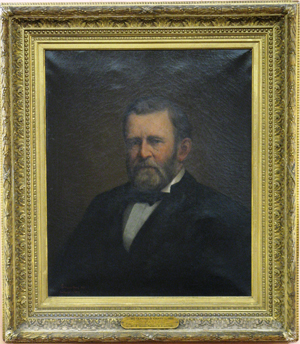 Born in 1822 in Point Pleasant, Ohio, Grant was the son of a tanner. He went to West Point rather against his will and graduated in the middle of his class. In the Mexican War he fought under Gen. Zachary Taylor. At the outbreak of the Civil War, Grant was working in his father's leather store in Galena, Illinois. He was appointed by the Governor to command an unruly volunteer regiment. Grant whipped it into shape and by September 1861 he had risen to the rank of brigadier general of volunteers.

Abraham Lincoln appointed him General-in-Chief in March 1864. Grant directed Sherman to drive through the South while he himself, with the Army of the Potomac, pinned down Gen. Robert E. Lee's Army of Northern Virginia. Finally, on April 9, 1865, at Appomattox Court House, Lee surrendered. Grant wrote out magnanimous terms of surrender that would prevent treason trials. As President, Grant presided over the Government much as he had run the Army.

Items on display in the Grant Room include: