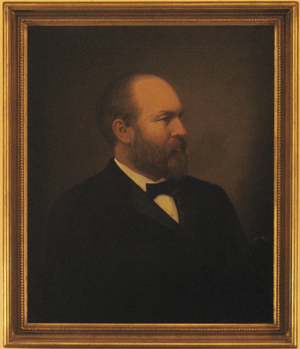 Born November 19, 1831 in Cuyahoga County, in Orange Township, now Moreland Hills, Ohio, James A. Garfield became a dedicated student so that he would avoid poverty. He graduated from Williams College in Massachusetts in 1856 before returning to the Western Reserve Eclectic Institute (later Hiram College) in Ohio as a classics professor. Within a year he was became the school's president. Garfield was elected to the Ohio Senate in 1859 as a Republican. During the secession crisis, he advocated coercing the seceding states back into the Union.

Garfield then became Lieutenant Colonel when the Civil War began and worked his way up to Major General after all of his success in the war. Garfield was nominated and won a seat in the U.S. House of Representatives which continued for nine terms and then eventually landed a seat in the U.S. Senate. All that he accomplished in legislation lead him to his Presidency.

Unfortunately, on July 2, 1881, Garfield was assassinated by Charles Guiteau, a mentally unstable man from Illinois. Garfield's term as the 20th President ended short when he passed away on September 19, 1881.

Items on display in the Garfield Room include: