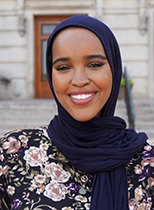 Rep. Munira Yasin Abdullahi fled Somalia at the age of three with her parents.  She grew up in Columbus and earned a Political Science degree from The Ohio State University.  She works as the programs director for the Muslim American Society. She is honored to be the first Somali Muslim woman to win an election in the State of Ohio.