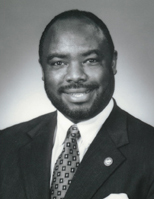 Barnes has devoted most of his professional career to public service. Working for the city of Cleveland, he served as a senior tax auditor for the individual audit department from 1989-91, for the legal department from 1991-1998, and for the department of finance from 1980 to 1998. In November, 1998, he was elected to the Ohio Legislature by the 12th House District.