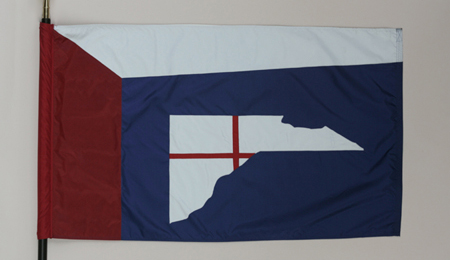 Long time public employee Chet Szymanski designed the Lucas County Flag in 1997. This design was in response to a contest being held to celebrate the centennial anniversary of the Lucas County Court House. Lucas County is a mixture of various people, and red symbolizes a state of belonging, and the mixture of race, religions and colors. White signifies the pure clear, and lawful operations that are shown to be favorable in regards to political situations. Blue represents the surrounding waters of the Maumee River and Lake Erie. Lucas County has the reputation for honoring nature. The red crossroads represent the roads from East to West, Ohio Route 80 and 90, and from North to South, I-75, where commerce passes through. The county was named for Ohio Governor Robert Lucas.