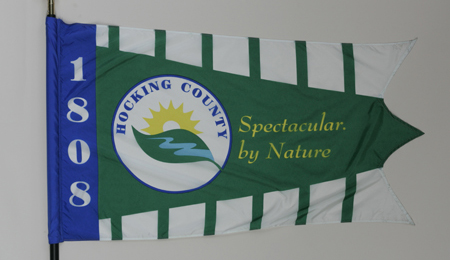 Pam Nelson designed the Hocking County flag during a contest held in conjunction with a statewide request from the Ohio Bicentennial Committee for each county to design a flag to be flown during Ohio's 2003 Bicentennial celebration. The Hocking County Commissioners declared Mrs. Nelson as the winner of the contest on July 18, 2002. The design of the flag is a representation of characteristics found in Hocking County. The blue/green is for the Hocking River and Hocking Hills. The green stripes are for the twelve townships. The three points stand for the three counties from which Hocking County was formed: Athens, Fairfield and Ross. The county was established in 1818, and its name is from the Native American word "Hoch-Hoch-ing" which means "in a bottle."