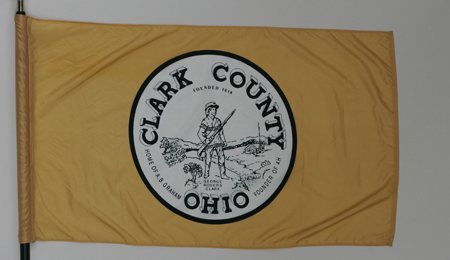 The circle in the center of this marigold colored flag is the seal of Clark County. It shows Brigadier General George Rogers Clark, who the county was named after. He defeated the Shawnee Indians near Springfield in 1780, and is shown standing on the bank of the Mad River. Clark County was established in 1818, and was the home of A.B. Graham, the founder of 4-H. The county flag is used at all county institutions, although some have a color seal and others do not.