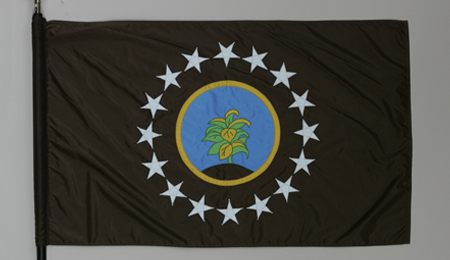 As part of the Ohio Sesquicentennial celebration in 1953, the Brown County Historical Society sponsored a flag design contest among the county's fourth grade students. Professor Hodge and his Wilmington College art class chose the winning drawing by Jerry McKenzie and Kenneth Brookbank from the Higginsport School. The field of brown represents the fertile soil and the name Brown County. The yellow circle stands for "O" in Ohio. The stalk of burley tobacco represents the money crop of the county. Every year, the Tobacco Festival is hosted here during August. A tobacco plant is featured on the flag, surrounded by 16 stars. Brown county was established in 1818. It was named for Jacob Brown, a general in the War of 1812.