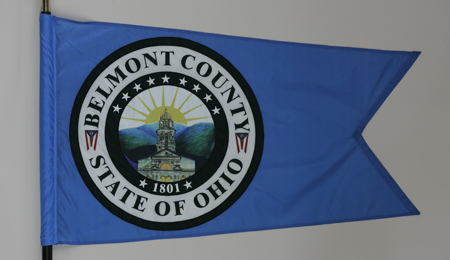 The county seal appears on a light blue burgee, which is considered to be the first Ohio county flag that is the same shape as the Ohio flag. The Belmont County seal was designed late one night in 1988 by Michael Massa, a law student working for the State of Ohio. The Ohio Senate formally recognized Mr. Massa for his design of the Belmont County flag in 1989, with a resolution during the 118th Ohio General Assembly. During the design process, three of his designs were displayed in Belmont County, and citizens of all ages voted for the best one. The competition was covered in the national news by Paul Harvey. The winning design shows the sun rising over the Belmont County Courthouse cupola. From the central sun emanate 9 rays toward the perimeter of the seal, ending at nine white stars, which Massa says "are emblematic of Belmont County's role as the 9th parcel to be initially incorporated into the Ohio Territory, via the 'Northwest Ordinance'." Belmont County was established in 1801. The name combines the French words "belle monte" which mean "beautiful mountain." The rolling hills and the Ohio River can be seen in the background of the seal. The official county seal includes a Latin motto which does not appear on the flag. "Meliorem Lapsa Locavit" means "He has planted better than the fallen," or "Having fallen, a better was planted," and was also used on the seal of the Northwest Territory.