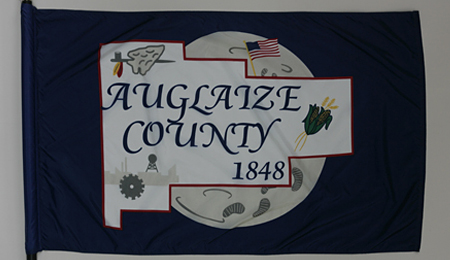 The Auglaize County flag was designed by Amanda Wuebbenhorst, a senior in the Wapakoneta City Schools in 2002. This design was selected in a contest suggested by the Ohio Bicentennial Committee and judged by the Board of Commissioners. The shape of the flag and the colors used are those chosen by Ms. Wuebbenhorst. The images shown on the flag come from the Auglaize County Seal, designed by Larry McLean in 1981. The moon appears on this dark blue flag because astronaut Neil Armstrong was born in Auglaize County. Armstrong made the first footprints on the moon and left a US flag there in 1969. This flag shows the outline of Auglaize County which was established in 1848. A peace pipe and arrowhead remind us of the history and folklore of Native Americans. The factory with a gear depicts commerce and industry. The corn and wheat represent the importance of agriculture. The county is named after the Auglaize River. The origin of the name is in dispute. Auglaize may mean "clay-filled waters" in French, or "fallen timbers" in the Shawnee language.