News Archive
Vintage "base ball" Game at the Ohio Statehouse 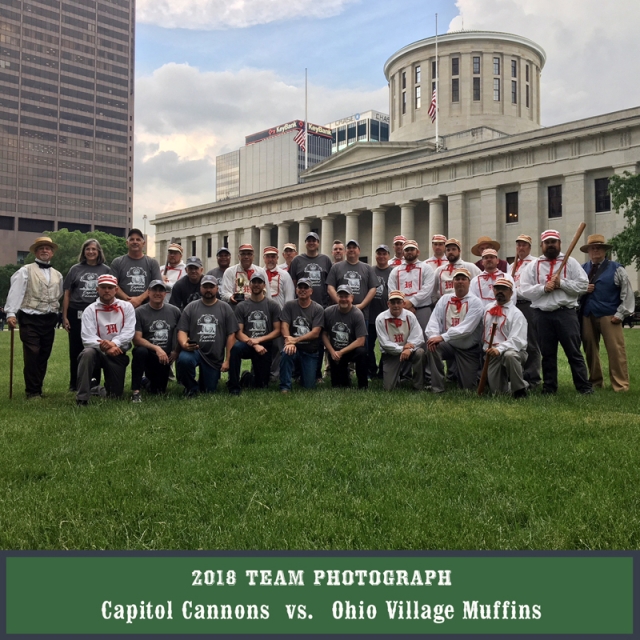 Team Photo - 2018
(Columbus, OH) –For the ninth consecutive year, the West Lawn (High Street) of the Ohio Statehouse will host vintage “base ball” (historically two words), as members of the 133rd Ohio General Assembly (OGA) take on the Ohio Village Muffins Tuesday, June 11, 2019. Reminiscent of barnstorming tours of yesteryear, the “epic struggle” begins at 5:30 p.m. The event is free and open to the public.
The two teams will be fighting for bragging rights and the all-important symbol of victory, the Richard Schuricht Memorial Cup. Prior to the game, the Statehouse’s 1st Ohio Light Artillery, Battery A will provide a cannon firing demonstration and discussion of leisure activities Civil War soldiers would have used to pass the time spent in camp.
Using vintage base ball equipment, the game is scheduled for seven innings and will be governed under The Rules and Regulations of the Game of Base Ball Adopted by the National Association of Base-Ball Players, March 14, 1860. Major rule differences between vintage base ball and modern baseball are listed below.

An out is declared if:

Enjoy an evening downtown, as you watch the OGA Capitol Cannons host the Ohio Village Muffins in an exhibition vintage base ball game. Come early and enjoy a ball park dinner. Concessions will be provided by the Paddy Wagon food truck and Milo’s Catering.


About the Ohio Village Muffins and vintage base ball
Formed in 1981, the Ohio Village Muffins were the first vintage base ball team in America to play a set summer schedule, and the Muffins also hosted the founding meeting of the Vintage Base Ball Association (VBBA). The Muffins play in uniforms period correct to the 1860s; the uniform consists of plain long pants, a white shirt with a bright shield containing the team emblem, a pill box hat, a leather belt and a bow tie. Recreational activities, especially base ball, were becoming more ingrained in American society during the middle part of the 19th century. The Muffins represent a changing America and highlight a game that would transcend all others and become America’s National Pastime. More information about the Muffins can be found here.

Support for this event is provided by the Ohio Lobbying Association, the Ohio Village Muffins, and the 1st Ohio Light Artillery, Battery A.
# # #