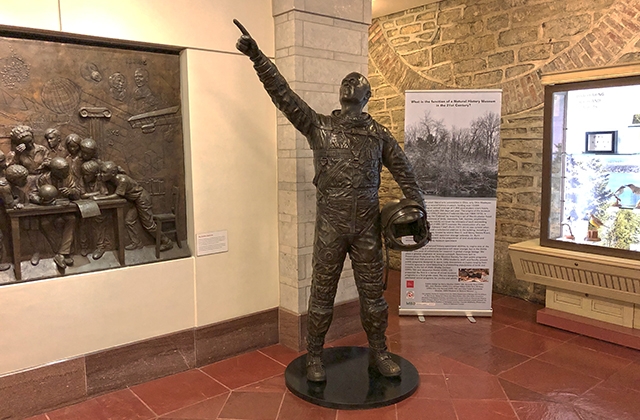 Statue by Alan Cottrill
A statue of Great Ohioan John Glenn will be displayed at the Ohio Statehouse from March 3, 2021 until March 2022. The exhibit honors Glenn during the 60th anniversary of his historic orbit of the globe, and on what would have been his 100th birthday celebration.

“John Glenn’s achievements in space exploration and public service make his statue most deserving of being displayed at the Ohio Statehouse,” said Senator Jay Hottinger, chair of Capitol Square Review and Advisory Board (CSRAB). “He is a national hero, and I am grateful we will be able to honor his legacy, as well as inspire future generations.”

The statue of Glenn will be installed March 3 in the Ohio Statehouse Museum Gallery. It will be displayed on the ground floor near the Great Ohioans exhibit. Glenn was among the first to be recognized as a Great Ohioan when the award was established in 2003 by the Capitol Square Foundation and CSRAB.

Artist Alan Cottrill created the seven-foot bronze statue of astronaut John Glenn in 2018. He also made the statue of Great Ohioan Thomas Edison in Statuary Hall of the U.S. Capitol. Cottrill was born and lives in Zanesville, Ohio, and from childhood, he has admired Glenn from nearby New Concord, Ohio.

The display honoring Glenn was approved as a temporary exhibit by CSRAB with the support of state Representative Adam Holmes of Muskingum County.