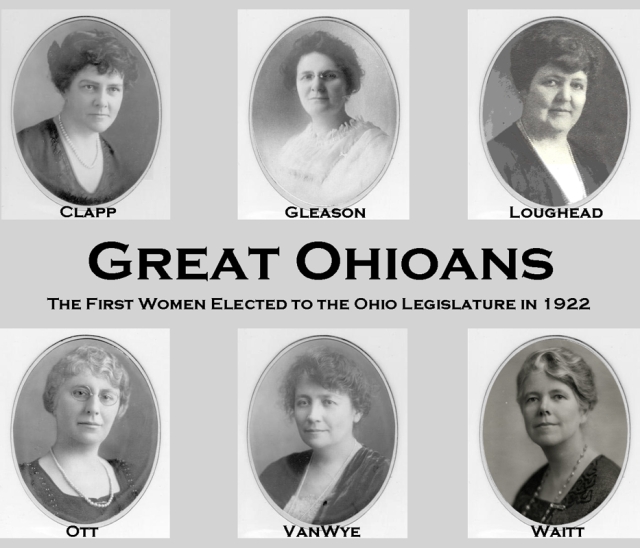 The 2020 Great Ohioan awardees are Ephraim Cutler and the first women elected to the Ohio legislature.

Ephraim Cutler, an early Ohio political leader opposing slavery and favoring state schools, was a pioneer and the first librarian of the Coonskin Library.

Ohio’s first women legislators, elected in 1922, include these Ohio Representatives:

Nettie McKenzie Clapp from Cuyahoga County. Rep. Clapp was the first woman legislator to sponsor a bill that was enacted into law.

Lulu Thomas Gleason from Lucas County was most noted with her campaign being managed entirely by women and being backed by the Women’s Christian Temperance Union.

Adelaide Sterling Ott from Mahoning County served three terms in the Ohio House. She was the first woman member of the House to preside over that body when she was asked by the Speaker to occupy temporarily the chair during a session.

May Martin Van Wye a member of the House and Senate from Hamilton County. She served in the House for three terms and the Senate for one term.

Nettie Bromley Loughead of Hamilton County was the first woman to receive a nomination to run for state Senate and the first to introduce a bill.

“In recognition of the Centennial of the Women’s Suffrage movement we honor the first six women elected to the Ohio House of Representatives and the Ohio Senate in 1922. These groundbreaking women set an example for women everywhere to be truly part of representative government,” said Capitol Square Foundation Chairman Charles Moses.

Moses added, “Ephraim Cutler’s role in shaping Ohio's Constitution in 1802 set the course for the prohibition of slavery in the United States. Among his many accomplishments, through his work, Ohio became the first state to prohibit slavery, effectively drawing a line in the sand, stating for all that Ohio would not allow slavery within its borders.”

The Great Ohioan Award commemorates Ohioans who have played a significant role in an event or series of events of lasting significance in world, American or Ohio history. To be selected for the Great Ohioan Award, the nominee must have resided in Ohio for a minimum of five years. In addition, at least 25 years must have passed since the event in which the nominee participated is being commemorated.

Since 2003, 51 Great Ohioans have been recognized with the award for the special roles they played in history.

“This year is the centennial of the 19th Amendment to the U.S. Constitution. It’s the perfect time to note the Ohio women who led the way for women’s suffrage,” said Laura P. Battocletti, CSRAB executive director. “Ephraim Cutler’s influence against slavery and for education formed our state in its early days. He deserves to be known as a Great Ohioan.”

Great Ohioan honorees and their achievements are archived in a permanent Great Ohioan exhibit, which is part of the Ohio Statehouse Museum. While countless Ohioans have performed great actions for their community and beyond, only a select few have been named a “Great Ohioan.” This exhibit allows visitors to have a greater understanding of the recipients of the Great Ohioan award and discover how they affected local, national and world history. The exhibit uses videos, photos, facts and web based technology to explore the life and legacy of each Great Ohioan.

Opened in 2009, the Ohio Statehouse Museum features high-tech, interactive exhibits that make learning about state government immersive. The museum is packed with historical artifacts and images that detail how government works and who has come to serve their fellow citizens. The new Ohio Constitution exhibit utilizes the original 1802 and 1851 Ohio Constitutions, in conjunction with visitor-interactive displays, to answer the questions, what is the Ohio constitution, what does it do and how does it impact Ohioans in the 21st century?

The Museum includes 5,000 square feet of exhibit space on the ground floor of the Ohio Statehouse that enriches the experience of schoolchildren and visitors. The Museum offers exhibits that encourage visitors to participate in the government process by making choices, expressing their opinions, comparing viewpoints and even becoming a part of an exhibit by giving a State of the State address. The museum’s “deep dive” approach to education enables visitors to better relate to the governing process.