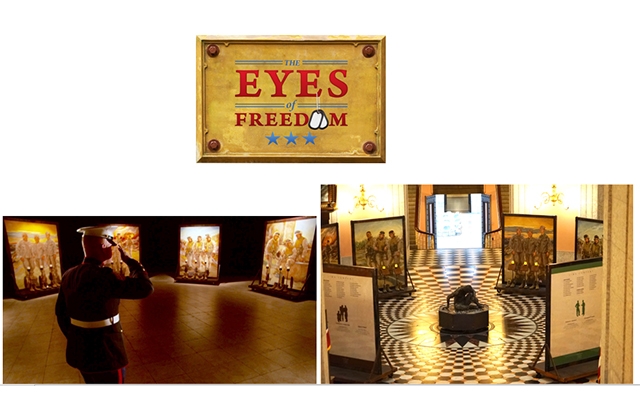 A Moving Memorial
The Eyes of Freedom: Lima Company Memorial will be exhibited to the public in the Ohio Statehouse Rotunda from February 26 through March 11. This traveling tribute depicts the fallen of Columbus Ohio-based Lima Company 3/25, one of the most heavily engaged and hardest hit units of US combat operations in the middle east. These 23 life-size portraits are displayed in communities across the nation, rallying those who attend honoring the service and sacrifice of all those who answer our nation’s call. Over the years the Eyes of Freedom mission has grown to include the fight against Veteran suicide and post-traumatic stress issues.

In 2018, artist/creator Anita Miller completed her latest addition to the exhibit. A very powerful and sobering bronze sculpture entitled “Silent Battle” depicts a service member sitting in solitude after a combat mission, looking at the dog tags and mourning the loss of a fallen comrade. Although we will always proudly honor ALL military service and those who sacrifice for our freedoms, the addition of the bronze sculpture brought the mental health portion of our mission to center stage. The Eyes of Freedom strives to connect struggling Veterans with resources, partner organizations, and other struggling Veterans to unite in the battle against the hidden wounds of war.

Quotes about the Eyes of Freedom Memorial

“We are very proud to emerge from a devastated 2020 that saw most of our exhibitions postponed or cancelled due to the pandemic. There are so many that truly need this experience and we couldn’t be more excited to bring this powerful tribute back on the road again, said Mike Strahle, Eyes of Freedom Executive Director and former member of Lima Co. 3/25. “We are returning to public display with Covid protocols in place to provide a very safe experience for everyone. It is only fitting that we begin a fresh touring year at the Ohio Statehouse where Anita Miller’s portraits were unveiled for the very first time back in 2008”, added Strahle.

Artist and creator of the exhibit Anita Miller added, “We are extremely grateful to our supporters whose strength and contributions made it possible for the Eyes of Freedom to survive such a year.” She later added, “The main reason for creating The Eyes of Freedom was to help heal family members and loved ones after suffering such loss in 2005, and now it travels as part of a much larger mission.”

Background of the Memorial

The Eyes of Freedom: Lima Company Memorial was created as a result of an Ohio artist’s vision, in which she saw the finished memorial and felt she was being asked to create it. With the help of the families of the fallen and the returned Marines of L3/25, the work was created and unveiled in the Ohio State House Rotunda in 2008, as the vision foretold.

Although the paintings in this Memorial specifically depict the 23 fallen Marines from Lima 3/25, it has become much more; The Eyes of Freedom honors all who have answered the call to service. Behind each portrait we feel the honor and sacrifice of the thousands of men and women who have served our country, in every branch of the armed forces.

About the Eyes of Freedom Memorial Organization

Mike Strahle retired from Lima Co. 3/25 and upon seeing The Eyes of Freedom unveiled at the Statehouse in 2008 knew he had witnessed something truly special. Three years later he would contact Anita Miller, the artist and creator, requesting to host the memorial at a Veteran’s Support fundraiser he co-founded. It was this reunion that sparked the passing of the baton from its creator to the hands of a brother in arms. For Mike this mission is personal. He too was badly injured in the explosion that took six of his squad members; two more fell to enemy fire just days prior.

The Eyes of Freedom Memorial’s exclusive transportation provider is R+L Carriers, Inc. based in Wilmington, Ohio.

For images and more information about the Lima Company Memorial: The Eyes on Freedom exhibit, visit www.EyesOfFreedom.org.