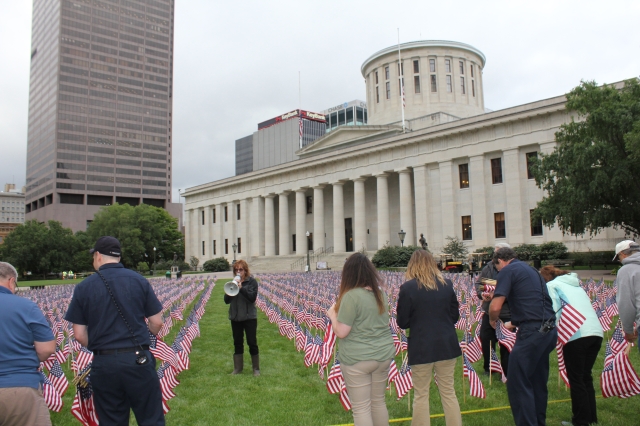 9/11 Memorial with flags in 2018
(Columbus, OH)— The Capitol Square Review and Advisory Board (CSRAB) will commemorate the attacks of September 11, 2001 with a memorial flag display on the west lawn of the Ohio Statehouse. A short program will begin Monday, September 9 at 5 p.m. on the west steps of the Ohio Statehouse and will feature representatives from the following partner organizations: the CSRAB, HandsOn Central Ohio, Franklin County Commissioners, Columbus Fire Department, and the National Veterans Memorial and Museum. After the program, volunteers from across central Ohio will install the 2,977 flags that comprise the memorial.

Since 2002 CSRAB has partnered with HandsOn Central Ohio and the Ohio Emergency Management Agency to display the 2,977 U.S. Flags that comprise the memorial. The flags represent the 2,977 victims of the September 11, 2001 attacks on the World Trade Center, the Pentagon and United Airlines Flight 93. When seen from above, the design represents the World Trade Center towers, with a space in the shape of the Pentagon and an open strip representing the field in Pennsylvania. Located on the West Lawn of the Ohio Statehouse, the memorial will be open to the public from 7 p.m. Monday, September 9 until 12 p.m. Friday, September 13.

The September 9 program will include short speeches by several dignitaries including:

The flag display is a memorable and moving scene on the Ohio Statehouse lawn. The flags will be checked daily by volunteers. On Wednesday, September 11, eighty recruits from the Columbus Fire Training Academy will straighten the flags between 10 and 11 a.m. The firefighter recruits will be accompanied by the Training Academy Staff.

To volunteer and for more information, contact Ralonda Hampton of HandsOn Central Ohio, ralonda.hampton@yahoo.com or 614-221-6766 ext. 7114.