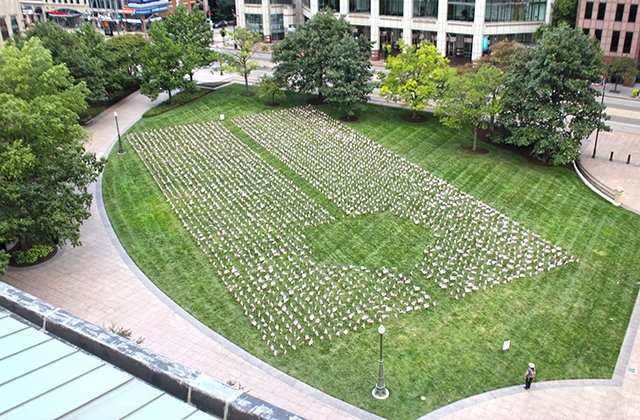 Photos available: After the installation, CSRAB posted overhead photos of the flag display on our website, http://www.ohiostatehouse.org/galleries/flags-for-9-11-in-2021. More photos will be posted soon.

The Capitol Square Review and Advisory Board (CSRAB) will commemorate the 20th anniversary of the attacks of September 11, 2001 with a memorial flag display on the west lawn of the Ohio Statehouse. A short program will begin Thursday, September 9 at 4 p.m. on the west steps of the Ohio Statehouse and will feature remarks from Governor Mike DeWine and others. After the program, volunteers from across central Ohio will install the 2,977 flags that comprise the memorial.

The Ohio Statehouse has been the venue for the annual 9/11 memorial from 2002 through 2019. The flags represent the 2,977 victims of the September 11, 2001 attacks on the World Trade Center, the Pentagon and United Airlines Flight 93. When seen from above, the design represents the World Trade Center towers, with a space in the shape of the Pentagon and an open strip representing the field in Pennsylvania. Located on the West Lawn of the Ohio Statehouse, the memorial will be open to the public from 7 p.m. Thursday, September 9 until 12 p.m. Monday, September 13.

The September 9 program will include brief remarks by several dignitaries including:

The flag display is a memorable and moving scene on the Ohio Statehouse lawn. The volunteers installing the flags include firefighter recruits from the Columbus Fire Training Academy, employees of COTA and the State of Ohio, veterans and many individuals. The flags will be checked daily by volunteers.

Note: After the installation, CSRAB will post an overhead photo of the flag display on our website, http://www.ohiostatehouse.org/galleries/flags-for-9-11-in-2021.