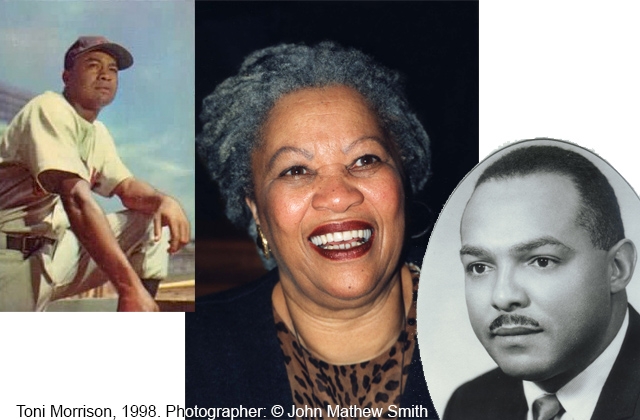 Toni Morrison, born in Lorain, Ohio, wrote novels, non-fiction and children’s books, and was the recipient of many awards including the Pulitzer Prize and the Nobel Prize in Literature.

Carl Stokes, from Cleveland, Ohio was one of the first Black elected mayors of a major U.S. city. He also served as a U.S. Ambassador and in the Ohio House of Representatives.


“It is fitting to recognize these three amazing people as Great Ohioans. Trailblazers in their field, Larry Doby, Toni Morrison and Carl Stokes broke barriers. They changed society and the way we all look at society. Their impact went well beyond Ohio’s borders,” said Capitol Square Foundation Chairman Charles Moses.

The Great Ohioan Award commemorates Ohioans who have played a significant role in an event or series of events of lasting significance in world, American or Ohio history. To be selected for the Great Ohioan Award, the nominee must have resided in Ohio for a minimum of five years. In addition, at least 25 years must have passed since the event in which the nominee participated is being commemorated.

Since 2003, 54 Great Ohioans have been recognized with the award for the special roles they played in history.

“The people of Ohio are our state’s most important asset. These Great Ohioans made their mark not only in history, but in the hearts of all those who are fortunate to know their stories,” said Laura P. Battocletti, CSRAB executive director. “We are proud that the Ohio Statehouse Museum can share their accomplishments with the people of Ohio and inspire future generations to become a Great Ohioan.”

While countless Ohioans have performed great actions for their community and beyond, only a select few have been named a “Great Ohioan.” The Ohio Statehouse Museum exhibit allows visitors to have a greater understanding of the recipients of the Great Ohioan award and discover how they affected local, national and world history. The exhibit uses videos, photos, facts and web based technology to explore the life and legacy of each Great Ohioan.

To view this press release and others, visit ohiostatehouse.org.