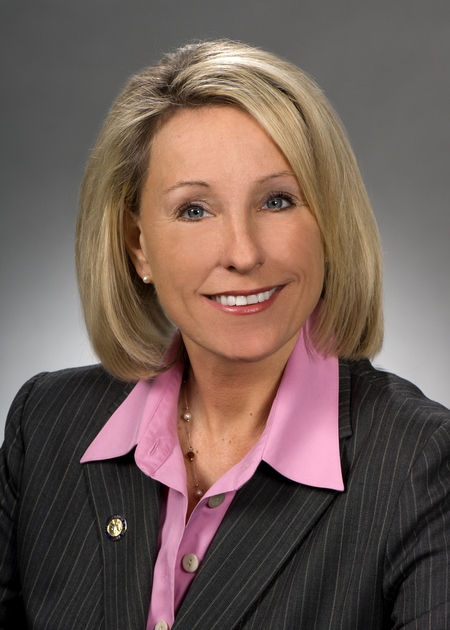 She is honored to be a part of the majority leadership team, serving as Majority Floor Leader.

The Cincinnati-area native and daughter of a union plumber earned a bachelor's degree in economics and business administration from Xavier University. She then received her law degree from Catholic University Law School in Washington, D.C. While she pursued her higher education, Garrison worked for the Ohio Department of Transportation and Ohio Department of Natural Resources as a legislative assistant in the state's Washington, D.C. office. In this position, Garrison lobbied Ohio's Congressional delegation to vote on legislation that positively impacted Ohio's funding for transportation and natural resources. Garrison then completed a judicial clerkship in Philadelphia and became a practicing attorney. She moved to Marietta in 1990, joining the law firm of McCauley, Webster & Emrick, where she became a partner in 1993. Three years later, Garrison opened her own private law practice where she concentrated on the general practice of family law, estates and trial work. She ran the Washington County Visitation Mediation Project for seven years, providing free mediation to parents working out their custody and visitation conflicts.

Garrison moved into public service to protect families and find a fix for school funding. She serves on the following House committees:

She also sits on the Primary Education subcommittee of Finance and Appropriations. She is a former board member of the domestic violence shelter EVE and the Washington County Mental Health & Alcohol Addiction Board, and she is past Commissioner on the Marietta Civil Service Board. Rep. Garrison also volunteered in the Marietta City Schools. She is currently a member of the Washington County Farm Bureau and both the Cambridge and Marietta Chambers of Commerce. Rep. Garrison is licensed to practice law in Ohio, Pennsylvania and West Virginia. She served as president of the Washington County, Ohio Bar Association from 1996 to 1997.

Rep. Garrison is a 2005 graduate of the Bowhay Institute for Legislative Leadership Development Program. She recently received the Ohio Economic Development Association's "Distinguished Legislator" Award, the Ohio Federation of Teachers' "Friend of Public Education" Legislator Award, and the "Friend of the Ohio Agricultural Research & Development Center and Ohio State University Extension" Award. This year she was awarded the Ohio Association of County Behavioral Health Authorities' Award for Legislative Excellence.