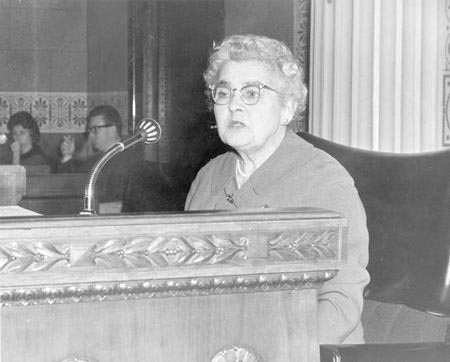 Golda Edmonston was a devoted civic leader of Franklin County, educated in Columbus at both North High School and at Capitol College of Oratory and Music. She married William E. Edmonston, a railroader in Columbus, and their family resided in Franklin County from 1906.

Edmonston's interest in politics and service in the Ohio House of Representatives may have been fated, or perhaps even inherited. Her great-great-grandfather, Samuel Myers, served in the Ohio General Assembly in 1813 and 1818. She herself was elected to serve five terms in the Ohio House of Representatives. Rep. Edmonston believed women had a duty in government "because I feel that since women have the job of taking care of their homes and the planning of their children, they should be interested in the laws under which they are governed" (Columbus Dispatch, January 23, 1955).

Her service achievements include the Republican State Central Committee woman (two terms), past national officer of the Grand Council of Ladies Oriental Shrine of North America, and Supreme Royal Matron of the Order of the Amarath of the World.