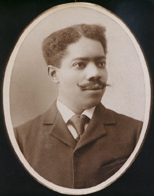 William Stewart's stature can be glimpsed through public reaction to his death. In 1958, the Youngstown Vindicator, noting the passing of "the dean of the Mahoning County Bar," declared "the public is not concerned with details of race, color or religion where ability and conscientious service are paramount."

Stewart was born in 1864 in New Castle, Pennsylvania. The next year, when his parents Lemuel A. and Mary Richards Stewart moved to Youngstown, they became the first black family in the community. Lemuel Stewart was a brick mason contractor, and his son William attended Youngstown public schools. After graduating high school, the younger Stewart worked for a time with his father and then became a baggage master on the P. C. and T. Railroad.

Interested in becoming an attorney, he began reading law in the offices of Woodworth and Wirt. L.D. Woodworth was a former Congressman, and his political experiences may have influenced Stewart. The young law student set up a business to assist Civil War veterans seeking pensions in avoiding bureaucratic red tape. Stewart later sold the business, using the proceeds and money saved from previous jobs to attend Cincinnati Law School. In Cincinnati, he met Consuelo Clarke, whom he later married. Clarke was studying to become a physician. After graduation, the couple returned to Youngstown and set up professional practices.

Elected to the Ohio House in 1895, Stewart was the first African American attorney and legislator from Youngstown. As State Representative, he supported Henry Clay Smith's anti-mob violence legislation, a bill targeting lynching. He also supported legislation to build the Market Street Bridge viaduct, to provide state aid to St. Elizabeth Hospital, and to support pensions for police and firemen. From 1907 to 1914, he served as special counsel for the Austro-Hungarian Embassy. Stewart then left politics to concentrate on his law practice. At his death, his estate was valued at more than half a million dollars.

A member of the National Association for the Advancement of Colored People, Stewart worked to improve racial relations. He organized Youngstown's first committee for interracial improvement. His hobbies included bridge, reading, and gardening. He especially enjoyed growing roses.