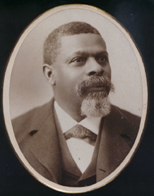 William Parham was born in Petersburg, Virginia, on September 15, 1839. Much of his childhood was spent in Philadelphia, where he lived from 1845 to 1856 and attended public schools. He moved to Pittsburgh, where he lived only a year before relocating to Cincinnati in 1858. During his residence there, he married Mary A. Crogan and taught in the public school system. He was a teacher for thirty years.

He attended law school in Cincinnati and in 1895 was elected to the 72nd General Assembly. Described as conservative and able, he played an active role in the legislative proceedings and delivered several memorable speeches during the session.