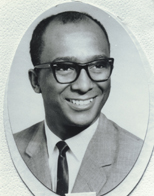 William Bowen, who became one of the most influential African American political leaders in Ohio, grew up in poverty in the West End of Cincinnati. He graduated from Woodward High School and attended Xavier University before dropping out to work full time in civil rights.

He became a force in the Cincinnati political scene in the late 1950s when, as the president of the Cincinnati chapter of the National Association for the Advancement of Colored People, he led a march to Coney Island to call for the desegregation of the amusement park's Sunlite Pool. As president of the NAACP from 1958 to 1964, Bowen relied on diplomatic skills rather than direct confrontation to encourage racial integration in his city. He was well known for his warm and gentle way with people.

Bowen won election to the Ohio House of Representatives in 1966, representing a district with a large African American population. Four years later, he was appointed to, and then won on his own, the Ohio Senate seat for the 9th district. He held the office until his retirement in 1994. During his tenure in the Senate, Bowen made his reputation as a champion of civil rights, fair housing, and affirmative action. He was the driving force behind the legislation that established state set-asides, resulting in the awarding of state contracts to minority contractors. He was officially recognized by the 107th General Assembly for outstanding leadership during the race riots in Cincinnati in the late 1960s.

Bowen was active in community organizations. He was a Mason, a member of the Zion Baptist Church, and an organizer of the Citizens Coalition Against Crime. He served in the National Conference of State Legislators and National Conference of Black Elected Officials. He was also a family man. He and his wife Sharon had five children, William, Kevin, Terry, Nikol, and Linda.

Remembering Bowen in 1999, Senate President Richard Finan said, "People forget the power he had in the Ohio General Assembly." Even in 1990, when his party was out of power, Bowen still got legislation passed which created a commission to study the plight of black males in Ohio. He was a forceful and unrelenting voice for the disadvantaged. As fellow Senator William Mallory, Sr. stated, he was an advocate "for blacks and for whites, for anyone who needed an advocate." During his farewell address to the Senate, he advised his colleagues to "remember those who are the least among us."

After his retirement from the Senate, Bowen worked as a government consultant and continued in the insurance business that he had started decades earlier. He died on April 22, 1999.