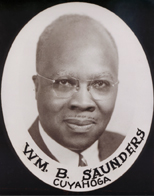 William B. Saunders, destined to become a prominent Cleveland attorney specializing in probate and real estate law, was born in Deland, Florida, in 1895, one of four children.

He showed an interest in community service, becoming one of the youngest chairmen of the board at the Antioch Baptist Church in Deland. In 1915, he completed a bachelor's degree at Morehouse College in Atlanta. He moved to Cleveland in 1916. He served in the Armed Forces during World War I and then attended law school at Baldwin Wallace. In 1923 he earned his law degree; he passed the Ohio bar the following year. Saunders opened a private practice with partner Raymond Chambliss.

The young attorney showed an interest in politics and public service. In 1934, Senator John R. Bricker appointed Saunders as a Special Assistant Attorney General. In 1935, Saunders was appointed solicitor for the city utility department and then named Utility Adjuster. Next, he became Assistant City Police Prosecutor. Although he resumed private practice in 1940 as an associate of attorney John E. Ballard and Judge Perry B. Jackson, he later returned to public office as Deputy Registrar in the Ohio Bureau of Motor Vehicles.

Saunders was deeply involved with his community, in both service and political organizations. He was a Republican ward leader for many years and a member of the Republican executive committee. He was president of the John Harlan Law Club and a member of the American Legion. A member of the Antioch Baptist Church since 1927, he was elected chairman of its board. He served on the board of the Cleveland Church Federation and held several other church posts. He was a member of the Glenville Community Council, the board of managers for the Cedar Branch Young Men's Christian Association, the executive committee of the National Association for the Advancement of Colored People, and the board of the Eliza Bryant Home for the Aged. His political leadership was acknowledged when, on April 30, 1982, the Republican National Committee awarded Saunders the Presidential Achievement Award for his half-century of support for the party.

Saunders' wife Elmira W. Saunders had died in 1965, and he had no other family. He maintained his law practice until the fall of 1981, when he retired. Upon his death in 1982, his will directed that his substantial estate be left in trust to sixteen nonprofit organizations in Cleveland. Saunders had made provision for the money to accumulate interest for ten years before being disbursed, and there was a five-year delay in setting up the trust, due to the unexpected death of one of the co-trustees. In 1997, fifteen years after his death, the organizations received $227,000 from the trust. Thus William Saunders' support for his community through service organizations continued well beyond his lifetime. Myron Robinson, president of the Urban League of Greater Cleveland, said he was utterly surprised by the gift and hoped it would "serve as a role model for others in the future."