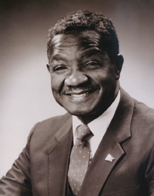 Troy Lee James, a former laborer and union member, served in the Ohio House of Representatives from 1967 to 1998. He attended Cleveland State (formerly known as Fenn College), Case Western Reserve, and Bethany College. While in the Ohio House, James rose to become the most senior member of the House Democratic Caucus. He served as the chairman of the Economic Development and Small Business Committee as well as the Aging and Housing Committee. He served on the Rules Committee and was the Ranking Minority Member of the Housing and Urban Affairs Committee.

He was active in a variety of important organizations and associations. He was a member of the Black Elected Democrats of Ohio, which became the Ohio Legislative Black Caucus in 1995. He was a member of the Democratic Executive Council, the Phyllis Wheatley Association, the National Conference of State Legislators, the Citizen's League, the Consumer Protection Agency of Cleveland, and the Ohio Advisory Council for the Aging.

James is now widowed. He has one child.