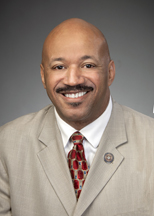 State Representative Thomas West serves the 49th House District, a diverse district that consists of a portion of Stark County, including Canton and most of Massillon. Rep. West served as a Canton City Council member for 13 years before he was elected to the state legislature.

While serving on Canton City Council, West acted as the Chairman of the Annexation Committee and a member of the Capital Improvement Committee, Special Improvement District and Canton Community Improvement Corporation. He worked on issues surrounding landlord and tenant disputes and various other local ordinances and issues during his time as councilman.

Before serving in local government, Rep. West worked as a mental health professional for over 25 years. During that time he served a range of communities in a variety of roles – both at the individual direct client services level as a licensed clinical social worker and at the macro-level as an advocate, founder, and program administrator. His work in the community has garnered both local and national recognition. His experience as a social worker enables him to bring a unique perspective to the legislature – one of which he is proud of. His passion for ensuring people have the tools and opportunities to live a life of dignity is apparent through his time of service to the community.

As state representative, Rep. West has worked diligently to pass a variety of bipartisan bills, including legislation to create a children’s behavioral healthcare network and legislation to prevent another Ohioan from dying in a tragic accident such as the one that occurred to Dallas Swogger.

In addition to serving in several legislative committees in his role as state representative, West was appointed to the Ohio Commission on Fatherhood, Ohio Advisory on Aging and the Governor’s Executive Workforce Board.

West earned a Bachelors and Masters of Social Work from the University of Akron after earning a degree in Business Administration from Mount Union College.

West and his wife have two children and reside in Canton.