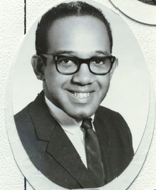 Thomas Hill pursued varied occupations; he was a salesman and painter, as well as an Employee Relations Specialist for Cook Coffee Company. He attended West Virginia State College and Western Reserve University. He and his wife Eloise had three children: Thomas, Debra, and Alisa.

A resident of Cuyahoga County, he participated in local politics and community organizations. He was a member of the Sixth District Citizens Committee, the Glenville Area Council, the Metropolitan Civil Association, the Glenville Civic Association, and the 27th Ward Democratic Club. He was also active in the National Association for the Advancement of Colored People, the political action club CHAMPS, and the Young Men's Christian Association.

In 1966, his bid for the state legislature resulted in victory. He became a member of the Ohio House of Representatives and served his constituents from 1967-1970, throughout the 107th and 108th General Assemblies.