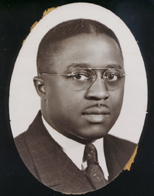 Little is recorded about State Representative Sandy Ray. He was serving as pastor of the Shiloh Baptist Church in Franklin County when he ran for office. Elected to the Ohio House, he served in the 95th General Assembly, 1943 through 1944. During his term, he was a member of the Education Committee. He introduced no bills or resolutions. At the end of his term, he decided against running for re-election, having accepted a call to pastor a church in New York.

Dr. Ray grew up in Texas and served congregations in Georgia, Illinois, Ohio and New York. Ministers and laypersons alike flocked to hear the insightful, practical, powerful biblical preaching of Sandy F. Ray. A leader among the religious community, Dr. Ray served as president of the Empire State Baptist Convention from 1954-1979 and as vice president of the National Baptist Convention, USA, Inc. from 1968-1979.