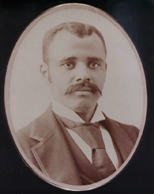 Samuel B. Hill was born in Xenia, Ohio, in Greene County in 1862. He entered public schools there and was able to achieve an education that qualified him to become a teacher. He taught school first in Carthage, Indiana, and then in his hometown of Xenia. In 1884, Hill accepted the job of heading up Lockland public schools in Cincinnati. He served with the Lockland schools for nine years.

He began his political career as a clerk in the office of the Cincinnati auditor, a position he held until 1893, when he was elected to the Ohio Legislature. Taking office during the 71st General Assembly, Hill served on the Blind Asylum Committee, the Common Schools Committee, and the Working Home for the Blind Committee.