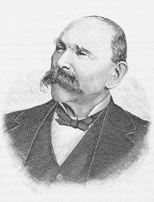 For many years, Robert Harlan was a dominant figure in Cincinnati's black community, which he served as an influential Republican operative until his death in 1897. Born of an interracial union in Mecklenburg County, Virginia, he took on by law the status of his mother, an enslaved quadroon. At an early age, however, he escaped much of the oppression of slavery. He was taken to Kentucky to be raised by James Harlan, the father of Supreme Court Justice John Marshall Harlan. There the boy was allowed to take the prestigious family name and was given an unusual degree of freedom.

Taught to read and write by the Harlan family, Robert Harlan was permitted to hire out his own time. He was apprenticed as a barber, a traditional African American occupation. His apprenticeship over, he opened a barbershop in nearby Harrodsburg. Later, he opened and ran his own grocery store fifty miles away in Lexington. Then, while still a slave, he moved to Cincinnati, where he lived from 1835 to 1848. He left Cincinnati for the California Gold Rush. In California, he made a quick fortune, reputedly from gambling. Returning to Cincinnati, he made substantial investments in real estate and business before visiting the London World's Fair in 1851. Eventually, he returned to Kentucky, purchased his freedom from the Harlan family, and moved back to Ohio.

In 1870, Harlan gained attention for an inspired oration on the ratification of the Fifteenth Amendment. This amendment states that the right of U.S. citizens to vote shall not be abridged on account of race, color, or previous condition of servitude. In 1872, he gained election as a delegate-at-large to the Republican National Convention and was appointed a special agent of the Treasury Department by President Chester A. Arthur. In 1875, he raised a battalion of four hundred African American men and was commissioned a colonel by President Rutherford B. Hayes. Harlan's unit was the forerunner of the 9th Ohio Battalion, a part of the 372nd Infantry Regiment in World War I.

Narrowly defeated for the legislature in 1880, he became alternate delegate-at-large to the Republican National Convention in Chicago in 1884. President Grover Cleveland, who labeled him as "an offensive partisan," then removed him from his treasury post. Ohio voters responded by electing Harlan a state representative in 1886. While in the Ohio House, Harlan worked with William Howard Day and Bishop Benjamin W. Arnett to obtain the repeal of the discriminatory Black Laws. After his service in the Ohio Legislature, Harlan was again appointed to serve in the U.S. Treasury Department from 1890 to 1892.