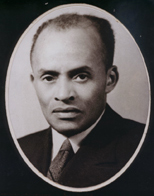 Richard McClain was born January 3, 1890, in Nicholasville, Kentucky, to Meredith and Ellen McClain. He attended public schools in Cincinnati and graduated from Howard University in Washington, DC with a medical degree. He interned at Freedman's Hospital in Washington from 1913 to 1914. In 1918, he married Alice E. Martin, who had graduated from the nursing program at Freedman's Hospital in 1916.

McClain began his medical practice in Cincinnati. During his career, he served as manager of Mercy Hospital, secretary of the Model Drug Company, and President of the Buckeye Medical Association in Cincinnati. He was active in fraternal organizations. He was a 32nd degree Mason as well as a member of the Knights of Pythias, the Elks, and the Alpha Phi Alpha fraternity. He was also a trustee of the Antioch Baptist Church.

Twice McClain ran for public office. He was elected to the Ohio House of Representatives in 1934. McClain's most significant piece of legislation was a measure to prohibit discrimination and intimidation on account of race, creed, or color in public building or works projects. It was unanimously approved by the House and passed by the Senate. Signed by Governor Davey, it became law July 24, 1935. McClain resigned from the House to run for Cincinnati City Council. He was elected and served on the Council for two years.