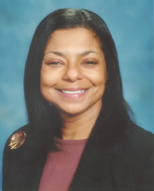 Born and raised in Dayton, Ohio, Rhine McLin grew up in a family that valued active community involvement. She was the daughter of State Representative C. J. McLin, Jr. She attended Dayton Schools and then earned a BA in sociology and secondary education from Parsons College in Iowa. She has a Master of Education degree in guidance counseling from Xavier University in Cincinnati. She enjoys teaching and is an instructor at Central State West, where she teaches Criminology, Juvenile Delinquency, and Race Relations. McLin is also a licensed Funeral Director and Embalmer for McLin Funeral Home in Dayton, Ohio.

Rhine McLin was appointed in 1989 to complete the two-year term of her father, the late Rep. C. J. McLin, Jr. She ran for the office in 1990 and was elected. After serving six years in the Ohio House, she was elected state senator by the 5th District. On December 30, 1994, when she was sworn into office, she became the first African American woman to serve in the Ohio Senate. In January of 1998 and again in 2000, McLin was elected by her peers as Minority Whip.

In the 122nd and 123rd General Assemblies, she worked on a number of committees: Human Services and Aging; Agriculture; Ways and Means; and Energy, Natural Resources, and Environment. In the 123rd General Assembly, she was also appointed to the Rules Committee and the Reference Committee.

Senator McLin has received a number of honors and awards. Among these are the Ohio Parks and Recreation Association "Legislator of the Year" Award and the 1998 Dayton Daily News Top Ten Women Award.