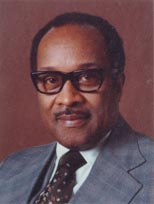 Born in Georgia in 1920, M. Morris Jackson was educated at Cleveland College and became a real estate broker in Cleveland.

He was interested in politics and served two terms as a Cleveland Councilman. In 1966, he was elected to the Ohio Legislature, serving as State Senator for the 21st District. In the Senate, he rose to Assistant President Pro Temp. He also served as a delegate to the Democratic National Convention in 1972 and 1976 and was a delegate to the Democratic National Mid-Term Conference in 1974.

He has been active in community and service organizations for many years. He was Chairman of the Advisory Committee of the Hough Salvation Army Multi-Purpose Health and Recreation Center. He was a member of the Board of Trustees of University Circle, Inc. He received the Rotary Club Award for Outstanding Community Leadership in 1960 and was appointed to the Comprehensive Health Planning Council in 1967. He continues to participate in the activities of the Citizens League of Cleveland and the Cleveland Branch of the National Association for the Advancement of Colored People.