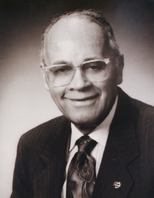 Lloyd Lewis graduated from the University of Dayton with a BS in Business Administration and from Central Michigan University with an MA in Public Administration. He is married and has two children.

In 1994, voters of the 38th District elected him to the Ohio House of Representatives. He served his constituents in the House for two terms, during the 121st and 122nd General Assemblies. While in the Ohio House, he worked on the Insurance, Public Utilities, and Ways and Means Committees. He completed his second term in 1998.

Lewis was active in a number of political and community organizations. He was a member of the Democratic Voters League and the Black Elected Democrats of Ohio, which in 1995 became the Ohio Legislative Black Caucus. He was a trustee of both The Dayton Foundation and AAA of Miami Valley. He served as a member of the Franciscan Health System of Dayton and as the treasurer of the Day-Med HMP.

He has received a number of honors: the Bank One Dayton New Leaf Award for 1993; the St. Elizabeth Medical Center Friend of the Year for 1992; The President's Club of Dayton Legion Honor for 1988; and the Marketing Association Marketer of the Year, Dayton Chapter, for 1984.