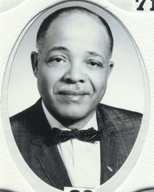 Born in Uniontown, Pennsylvania, in 1913, Larry G. Smith moved to Cleveland as a child, attended public schools, and graduated from old Central High School. Smith completed courses in insurance and real estate. He married and had three children, Larry, Karen, and Gwen.

A gifted businessman, he worked in a variety of occupations. At an early age, he began working as a shoeshine and waiter at the Union Club. While continuing to work at the Union Club, Smith took a job as a crane operator. In this capacity, he worked for American Steel and Wire for ten years. Then Smith and his wife opened a catering business, hiring many of the waiters they knew from the Union Club. Having done very well in the catering business, Smith invested the profits in a trucking business in 1946. The Larry G. Smith Trucking Company became one of the largest trucking firms in northeast Ohio. After a fire destroyed the business in the early 1950s, Smith moved on, becoming a real estate and insurance agent. Simultaneously, he worked as a bail bondsman.

He enthusiastically participated in local politics and community organizations. In the 1960s, he was elected precinct committeeman and rose to the position of Democratic leader of the old 20th Ward. He helped found CHAMPS Social Club, a political action organization. He was active in The Community Opportunity Board, the Bell Center, League Park Center, Hough House, and Hough Area Development Corporation. He was a member of the Cleveland Chapter of the National Association for the Advancement of Colored People and was a Shriner.

In 1965, Democratic Party officials stripped Smith of his leadership position because he supported Carl B. Stokes for mayor rather than backing the party's endorsed candidate. In 1966, Smith ran for and was elected to the office of State Representative. His constituents re-elected him twice. While in the Ohio Legislature, he worked together with C. J. McLin in forming the Black Elected Democrats of Ohio, which became the Ohio Legislative Black Caucus in 1995.

After Smith left the House in 1971, he served as a lobbyist for Cuyahoga County and as an administrator in the county recorder's office. He retired in 1981 and died in 1992.