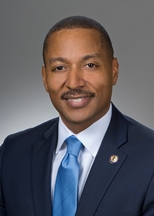 Prior to his appointment as State Treasurer, Boyce served eight years as a member of the Columbus City Council, of which the last three he was elected as President Pro Tempore and served as Chairman of the Public Finance Committee. During his tenure on council in Columbus (the 15th largest city in the nation, and the largest city in the country with a AAA Bond Rating from all three major bond rating agencies), he established a record of fiscal integrity, performance based budget practices, and oversaw the adoption of the city's $1.3 billion dollar annual budget, which includes a capital budget of nearly $400 million dollars for roadways, neighborhood development, and infrastructure improvements.

Additionally, Boyce founded the Columbus Youth Commission, significantly expanded parkland and greenways, advocated for stronger civil rights laws, and championed job creation strategies that led to the creation or retention of over 20,000 jobs in central Ohio.

Boyce also served as Executive Director of KnowledgeWorks Ohio, a non-profit organization created with the mission of improving Ohio's school systems through public development and advocacy. During his tenure at KnowledgeWorks he was a part of a team that invested over $100 million dollars in Ohio's public school systems, implementing cutting edge education models such as Project GRAD, Small Schools, and Early College.