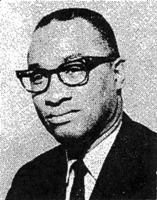 Born in Jackson, Mississippi to Reverend John W.E. Bowen, Jr. and Margaret Davis Bowen, Senator John Bowen attended Lincoln University in Oxford, Pennsylvania until he was drafted into the United States Army in 1945. While serving in the Army, Senator Bowen qualified as a sharpshooter and was eventually assigned to the military police as a special criminal investigator. In October 1946, Senator Bowen received an Honorable Discharge and resumed his academic studies.

Additionally, Senator Bowen has held numerous positions with the YMCA at the local and regional levels and he was Co-Chairman of the United Negro College Fund’s Columbus Campaign. Senator Bowen is a life member of Alpha Phi Alpha Fraternity, Inc. Among his countless awards and citations, Senator Bowen received The Ohio State University Centennial Achievement Award in 1970, and was awarded an Honorary Doctor of Laws Degree by Ohio Northern University in 1971.

Senator Bowen and his wife Jeanne Leahr Bowen are the parents of three daughters and one son. They have four adult grandchildren and one great grandson.