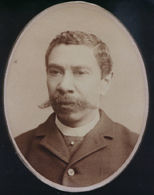 Trailblazer John P. Green was the second African American to serve in the Ohio House of Representatives and the first to serve in the Ohio Senate. He was born in 1845 to free, light-skinned parents in the small eastern North Carolina town of New Bern. His father, an artisan, died when Green was five, and the boy grew up in extreme poverty.

In 1857, the Green family moved to Cleveland, where they hoped to find safety and prosperity. He attended Central High School in 1869 and studied law at the Union Law School in Cleveland. Admitted to the bar in 1870, he began practicing law. Green was elected a justice of the peace in 1873, thus becoming the first black elected to office in Cleveland. Subsequently, Clevelanders elected Green to three successive terms in the General Assembly, two in the House of Representatives and one in the Senate.

During his first term, Green served on the Corporations and Library Committees and offered a resolution condemning the contract labor system in operation at state prisons. Later, he served on the Turnpike Committee and supported legislation granting veterans' benefits. In 1893, Green and Rep. George Jackson submitted competing bills to amend the state's civil rights law. In 1894, after differences between the bills were resolved and Rep. Harry C. Smith reintroduced the resulting measure, the bill was passed into law. Green's most noted legislative achievement occurred during his second term?a bill establishing Labor Day in Ohio. When the federal government followed suit, many called Green the Father of Labor Day in the United States.

In 1897, President McKinley appointed Green to the position of Government Stamp Agent, a job he held until Congress abolished the position. Returning to Cleveland, Green resumed his law practice and entered into a partnership with his two sons, William R. and Theodore B. Green. Before the end of his life, John Patterson Green wrote and published an autobiography, Fact Stranger Than Fiction.

Green was hailed as one of the most prominent of Ohio's early African American politicians. By 1900, according to the Cleveland Journal, many blacks throughout the nation viewed John Green as "one of the smartest colored men in Ohio." Announcing his death in 1940, the Cleveland Call & Post referred to Green as a pioneer and a "fearless fighter and champion of his people and their rights."