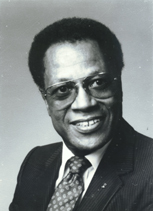 John D. Thompson was born in Cleveland in 1927 and attended school there. He entered the Army as a private in 1946 and served in the 24th Infantry Regiment, Pacific Theatre Operation, from 1947 to 1949. Having advanced to sergeant, Thompson was honorably discharged and received the good conduct medal in 1949.

Thompson gave of his time and energy to a number of community associations and organizations. He was a member of the Lee Harvard Community Association (where he was Honorary Board Member), Mt. Pleasant Community Council, and the Lee Seville Community Association. He served on the Task Force on Education of the Lutheran Ministry, was a Prince Hall Mason, and became Shrine Chairman of the 15th District Club.

In 1970, voters of the 44th District elected him to the Ohio House of Representatives. Subsequently, he also represented the 15th and 16th Districts, serving eight terms in the Ohio Legislature. He was a popular and effective legislator, receiving a number of awards and honors from his colleagues and constituents. He received the Mt. Pleasant Community Council Award, for example, and was named Man of the Year, 15th District, in 1972 and Politician of the Year in 1974.