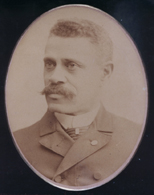 Jere A. Brown was born in Pittsburgh, Pennsylvania, attended Avery College in Allegheny, Pennsylvania, and lived in Canada and St. Louis before settling in Cleveland in 1870 or 1871. He became the first African American to receive a political appointment in Cuyahoga County when he began serving as bailiff for Judge Daniel R. Tilden. In 1877, he was appointed deputy sheriff. Later, he was clerk for the Board of Equalization and Assessment and in 1881 became a letter carrier, a position regarded as elite at the time. Four years later, he resigned his postal position because it kept him from politics. In 1885, Cuyahogans elected Brown as State Representative and in 1887, they re-elected him.

Brown took an active role in promoting fairness for Ohio citizens. He sponsored legislation that prevented life insurance companies from discriminating against African Americans by charging them higher rates than whites. He helped secure funds for Wilberforce College and helped repeal Ohio's Black Laws. In 1890, he supported the organization of the militant civil rights group, the Afro-American League.

Party politics also interested him. For his support of U.S. Senator John Sherman, he received a position as a customs inspector in 1890. He subsequently gained an appointment to the Ohio Department of Insurance, becoming its first African American member. After serving in the Department of Internal Revenue in Washington, DC, Brown returned to Cleveland as an immigration inspector.

With his wife Nina L. Brown, he had two children, Francis and Jere. Representative Brown was a Mason, a member of the Republican State Committee, and a trustee of Wilberforce College, where he is buried.