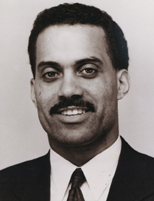 Jeffrey Johnson, a native of Cleveland, is a graduate of Collinwood High School. He received a bachelor's degree with honors in Telecommunications from Kent State University. He also studied City Planning and Development at Cornell University, and received both his Doctor of Law degree and Master's degree in Political Science from Case Western Reserve University. Johnson's organizational memberships include Phi Beta Sigma Fraternity, the National Association for the Advancement of Colored People, and the Ohio Democratic Party.

Johnson began his political career on Cleveland City Council, where he represented the 8th Ward. As a councilman, Johnson had a reputation as an outspoken advocate for his ward. He led a citywide campaign to establish the Sex Crimes and Child Abuse Unit within the Cleveland Police department, and co-sponsored the Cleveland fair housing ordinance. He was elected to his council seat three times and was selected to serve as council majority leader in November 1989. He has been recognized for his leadership in providing millions of dollars to the community of Glenville for housing and economic development.

He won election to the Ohio Senate in November of 1989, when he earned the largest victory margin of any of the contested 1990 Senate campaigns. In 1994 he was re-elected without opposition for his second four-year term.

During his tenure with the Ohio Senate, Johnson sponsored and co-sponsored many bills. Among these were a 1995 law restructuring the Ohio criminal sentencing laws, a 1992 law creating the Ohio Joint Select Committee on Infant Health and Family Support, and legislation to bar sexual harassment in the workplace. He also supported legislation for comprehensive health care insurance, civil rights, welfare, juvenile justice, and prison reform, as well as proposed a constitutional amendment to declare housing a public purpose.