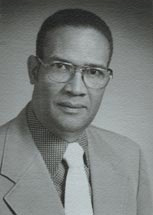 Ike Thompson of Cuyahoga County was educated at Fenn College, which was later known as Cleveland State. He married, and with his wife Lodeamer, he had one daughter, Arwilda.

Thompson was elected to the Ohio Legislature in 1970 and proved to be a popular state representative. His constituents re-elected him nine times, and he served until 1970. He spent a number of years on the Transportation Committee in the House.

He was active in political and community organizations. He was a member of the Knights of Columbus, the National Council of State Legislators, the Forest Hill Parkway Council, Inc., the PTA, the National Association for the Advancement of Colored People, and the St. Aloysious Church. He was vice-chairman of the Cuyahoga Democratic Party and the co-chairman of the Cuyahoga County Delegation.