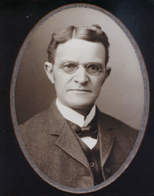 George Hayes was born near St. Landry Parish, Louisiana, on November 1, 1847. He was the youngest son of Joshua and Anna Hays. Joshua was a free Creole and Anna was a slave of African American and Native American descent. Their son, by Louisiana law, became at birth the property of his mother's master.

At seven, the boy was taken with his family to Franklin, Kentucky. He remained there through the beginning of the Civil War until the fall of Fort Donelson on February 16, 1862. Fort Donelson lay in western Tennessee, just across the Kentucky state border. Its loss was a blow to the South. At that critical moment, the boy was pressed into the Confederate Army as General Floyd began his retreat. In September, Hayes escaped,

traveled all the way to Nashville, and joined the Union Army at Fort Negley.

Being then only fourteen years of age, he was made an attendant to the officers. When General Negley's army consolidated with General Sherman's, Hayes was among those who followed Sherman on his march to the sea. Hayes stayed with the Union Army until April, 1865, when he went to New York City in search of work and what he termed "mental improvement."

Working as a waiter, he acquired books and studied in his free time. From New York, he went to Cleveland, where he began attending public schools. In August, 1867, he moved to Cincinnati to work as a waiter and continue his studies in leisure moments. In January, 1869, he joined a surveying party led by Colonel Albert, U.S. Engineers, and assisted in a survey of the Grand River in Indian Territory as well as the Arkansas River to Little Rock. After this fieldwork, he returned to Cincinnati where he began teaching in the public schools.

In October, 1871, Hayes gained appointment as an attach? of the U.S. Circuit and District courts, thus becoming the first African American clerk in a U.S. Court clerk's office. He continued with the court for nearly thirty years, until his nomination for State Representative in 1901.

During those years, he served under Judges Swing, Emmons, Sage, Baxter, Jackson, Taft, Lurton, Stevens, Day, Thompson, Hollister, Peck, Hickenlooper, and Nevin, all of whom commended him for his work.

Hayes was active in the Republican Party and politically influential in his community. In 1897, a committee of twelve prominent Republicans in his county recommended that he make a bid for State Representative. Although Hayes lost in his initial attempt, he won election in 1901. In the Ohio Legislature, Hayes served on the Blind Asylum Committee as chairman, on the Privileges Committee, and on the Revision Committee.

Hayes was a family man, devout church member, and community leader. He and his wife Mamie Forte Hayes, married since 1874, had five children. He was a member and trustee of the Union Baptist Church. He was Superintendent of Sabbath Schools for both the Union Baptist and the Calvary Baptist Churches. He was a 32nd degree Mason, the District Grand Director of the Grand United Order of Odd Fellows, and an active member of True Reformers.