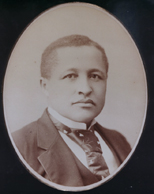 George Henry Jackson was born in Ontario, Canada, on October 4, 1847. His parents were free, but his grandparents had once been slaves of the Custis family of Arlington, Virginia. Jackson's family, who had been visiting relatives at the time of his birth, returned to the United States and lived in Lafayette, Indiana, before moving to Cincinnati in 1849. In the family's new hometown, young Jackson entered black public schools, often called common schools. When the boy was fifteen, his father died, and he began to help support the family by selling newspapers on the packet steamer Magnolia.

Despite his responsibilities, Jackson was determined to continue his education. Under the tutelage of Peter Clark, he studied to become a teacher. He succeeded and taught school in a variety of communities across the Ohio Valley. In the late 1870s, he met and married Virginia Gordon. Her father, Cincinnati coal dealer Robert Gordon, had made a fortune during an antebellum coal famine.

With the financial help of his father-in-law, Jackson gave up teaching and entered law school. He began practicing law in 1884. As members of an affluent and refined African American upper class, George and Virginia Jackson were able to purchase a home and live comfortably in an area of Cincinnati that was predominantly white.

Elected with more than 32,000 votes, Jackson began his term in the Ohio House of Representatives in 1892, serving on the Privileges Committee. In 1893, Jackson and Representative John Green each submitted bills to amend the civil rights law of Ohio. By the time the competing bills were combined, neither Jackson nor Green was in the Legislature. But Harry T. Smith, who had built on their work and resolved the differences in the two bills, reintroduced the legislation. It passed into law in 1894.