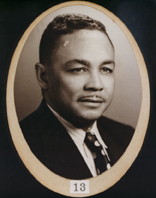 Records provide only a glimpse of the background of Frederick Bowers. He was a real estate broker who was elected to the Ohio House by Montgomery County voters in 1950. A Republican, he served in the House from 1951 through 1954.

He was very active on committees, working on the Financial Institutions, Insurance, Public Welfare, Liquor Control, and Organization of State Government Committees. He was also a prolific lawmaker, sponsoring eight bills during his four years in office. Among these was Am. Sub. H.B. 174, introduced during the 100th General Assembly, authorizing the board of county commissioners to appropriate money for training sheriffs and deputy sheriffs. This bill, which improved law enforcement training across the state, became effective on October 2, 1953.