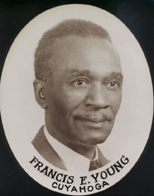 Born in Baltimore, Maryland, Francis Young was a graduate of Brown University. He earned his law degree from Baldwin-Wallace College at Berea and moved to Cleveland in the first decade of the twentieth century. He worked as a postal clerk and an attorney.

Young was active in a variety of organizations. He was a member of the Baldwin-Wallace alumni group in Cleveland, the Alpha Phi Alpha fraternity, the Prince Hall Masons, and Mount Zion Congregational Church. He was one of the founders of the Cleveland Chapter of the National Association for the Advancement of Colored People, which began by meeting in his home. Young and twenty others formed the chapter in response to discriminatory practices at the local post office. He was president of the Cleveland chapter from 1917 to 1920.

In 1946, voters in Young's district elected him to the Ohio House of Representatives. He served in the House during the 97th General Assembly, from 1947 through 1948.