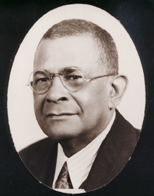 David Turpeau, a minister from Hamilton County, was first elected to the Ohio Legislature in 1939. During his long tenure there, he served on the Federal Relations Committee, the Public Welfare Committee, and the Education Section of the Finance Committee. He also sponsored seven bills. Among these were H.B. 346 to provide relief from appeal bonds and H.B. 425 to establish the Hawthornden State Hospital.

Turpeau also persuaded the state to purchase the Harriet Beecher Stowe house on Gilbert Street in Cincinnati. Stowe's book Uncle Tom's Cabin, first published in 1852, had aroused abolitionist sentiment across the North by presenting a heart-rending depiction of slavery. Invited to the White House during the Civil War, Stowe reportedly was greeted by Lincoln with the words "So you're the woman who wrote the book that started this great war." The Stowe house is now a museum at which visitors can learn about her life, writings, and times.

Voters elected Turpeau to the Ohio House five times, and he served there until his death on February 13, 1947.