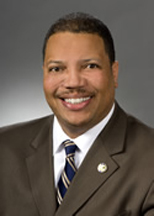 State Representative Clayton R. Luckie (D-Dayton) of the 39th District is serving his third term in the Ohio House, representing residents in Dayton, the city that nurtured him from childhood.

Rep. Luckie graduated from Chaminade-Julienne High School in Dayton. He then earned an associate¿s degree from Sinclair Community College and a bachelor¿s degree from The Ohio State University.

Rep. Luckie is proud of his roots and his community. He serves at Marketing and Sales Director of JEC Paper and Related Products, one of the nation¿s largest minority-owned companies. His commitment to public service, though, has spanned more than a decade. He served on the Dayton Public School Board from 1996 to 2006, which fueled his desire to fight for better education statewide in the Ohio General Assembly.

Back home, he is a member of the DayBreak Board of Trustees and the Dayton Urban League Black Leadership 9th Class and Steering Committee. He also sits on the Phillips Temple CME Church Steward Board, and he is a Kappa Alpha Psi Inc., Life Member.

His community activities include involvement, past and present, with the Southern Dayton View Community Development Corporation and the Southwest Priority Board Office. He has been President of the Black School Board Members Association, the Statewide Minority Business Taskforce and the Ohio Black Caucus, Vice President of the Young Democrats, and a trustee for the Ohio School Board Associations.

Rep. Luckie is also proud to have been the first minority Chair of the Downtown Holiday Festival in Dayton. He was selected as a ¿Top 40 Under 40¿ winner by the Dayton Business Journal in 2003.

Rep. Luckie lives in Dayton with his wife Lisa and their son Christopher.